Finding the next explosive growth opportunity in the stock market isn’t easy. Some of the most successful companies today were generating enormous losses and looked like unattractive investments before they hit the big time.

Steve Jobs, the late founder of Apple, liked to quote hockey player Wayne Gretzky: “Skate to where the puck is going to be, not to where it has been.” As investors, buying into the tech-driven trends of the future sometimes means buying into a vision, rather than rational metrics like profits in the short term.

It can be a risky strategy, but that’s the price of high-growth rewards. These two companies use new-age technologies to shape the future, and they are attractive buys for the next decade. 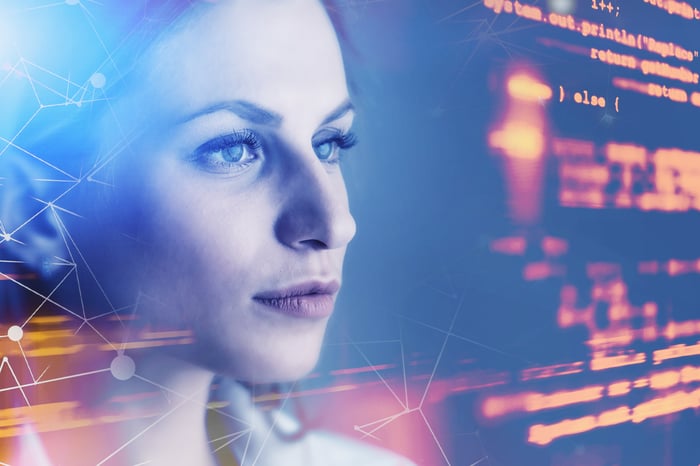 The case for C3.ai

C3.ai (NYSE:AI) is a first-of-its-kind enterprise artificial intelligence (AI) company, selling customizable AI applications to a very broad portfolio of users. Like most companies blazing a brand-new trail, C3.ai has experienced growing pains in its first year as a publicly-traded company. Amid concerns about slow growth, its stock is down over 70% from its all-time high after making its market debut in Dec. 2020.

But that might spell opportunity for long-term investors as new customers flock to do business with the company, driving an impressive pace of revenue growth.

The growth continued in the first quarter of fiscal 2022 as the company added nine more customers for a current total of 98. Management is guiding for full-year revenue of $243 million to $247 million. Revenue growth lags behind customer growth, because it can take up to six months for C3.ai to build an application for a client, so we should see revenue accelerate over the next few quarters.

The quality of C3.ai’s customer base (and collaborations) is where the real value lies. It’s currently working with two of the largest cloud companies on the planet to develop new artificial intelligence solutions for their customers: Alphabet‘s Google Cloud and Microsoft‘s Azure.

But perhaps the most surprising thing about C3.ai is that 35% of its revenue comes from the oil and gas industry, which is now its largest customer base. In an unlikely partnership, the company developed a suite of AI products with oil giant Baker Hughes to predict critical equipment failures and manage carbon emissions by boosting efficiency.

It’s just one of eight broad industries that have engaged C3.ai, and as AI becomes more widely applicable, the company’s addressable market will only expand. Long-term investors will see their patience pay off, and one Wall Street firm thinks the stock could more than double from here. 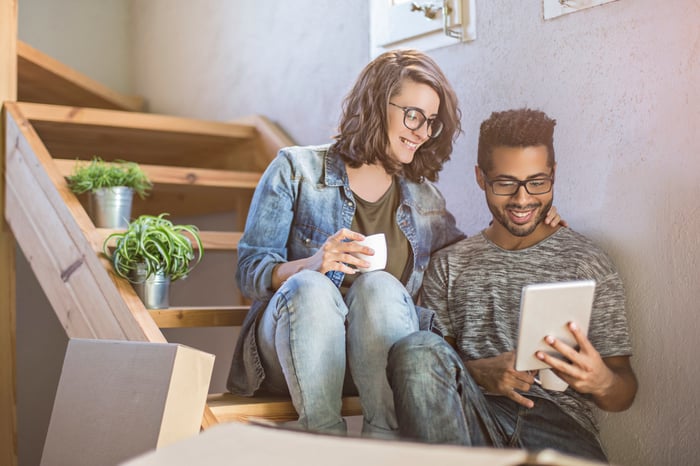 The case for Zillow

Zillow Group (NASDAQ:Z) (NASDAQ:ZG) has used technology — including artificial intelligence — to introduce a seismic shift to the real estate industry. Via a process called iBuying, Zillow Offers purchases thousands of homes directly from sellers each year with the intention of flipping them for a profit.

It means the seller gets a reliable cash offer and a fast sale without the need for a real estate agent (or their 2.5% listing fees), and the resulting home sales for Zillow account for almost 60% of the company’s revenue.

But eight brands in total fall under Zillow’s umbrella, and they offer a suite of complementary services to accompany its Zillow Offers business. The company has a mortgage arm, provides closing services, and even sells software to traditional agents to help them build their networks.

The company has truly become the Swiss Army Knife of the real estate sector, and consumers are adopting its next-generation services in increasing numbers. That’s reflected in its powerful revenue growth since 2018.

Sellers can get a “Zestimate” (approximate home value) instantly by navigating to the company’s website and entering the required details. Then, they can opt for a no obligation, formal cash offer from Zillow, which is provided within three business days. Given the weeks or months of stress that can accompany the traditional selling process, it’s easy to see why Zillow Offers resonates with consumers.

Providing Zestimates requires the company to track the value of millions of homes across the country, and that’s only possible with artificial intelligence and machine learning. Zillow’s algorithm takes into account hundreds of attributes for each house, doing an amount of work that would have once potentially needed millions of employees.

The U.S. real estate market is currently worth over $36 trillion, so change takes time. Zillow’s $6.6 billion in estimated revenue this year suggests it has only captured a fraction of the opportunity so far. Looking to the future, if the real estate industry is the puck, then Zillow is where it’s going.

This article represents the opinion of the writer, who may disagree with the “official” recommendation position of a Motley Fool premium advisory service. We’re motley! Questioning an investing thesis — even one of our own — helps us all think critically about investing and make decisions that help us become smarter, happier, and richer.