History lessons teach us about World War II, and with it the use of the atomic bomb. The damage caused by such a machination is chilling. Therefore, take the trouble to understand what might happen if your area were to be bombarded. When a nuclear bomb is dropped in an area, the resulting effects are diverse. Here is a site where you can simulate the effects of a nuclear bomb on a map.

The calculation of a nuclear bomb identical to Little Boy

Little Boy is the name given to the nuclear bomb that caused the death of several civilians in Hiroshima. If your region is the place of attack of this explosive device, you can calculate the risks on the NUKEMAP website. First, through the interface settings, you can define the attack range of the weapon. Indeed, it is this area that suffers the most damage once the nuclear weapon hits the ground. So the site helps to determine the radius of the bomb’s fireball.

Also, the consequences of the shell begin once it hits the ground. With the site, you have the possibility ofassess the radioactive consequences. At the same time, the damage in human loss is not lacking. It is through the assistance of this platform that the number of victims will be estimated. In addition, serious injuries, invalids and also possible cripples are calculated on this interface. 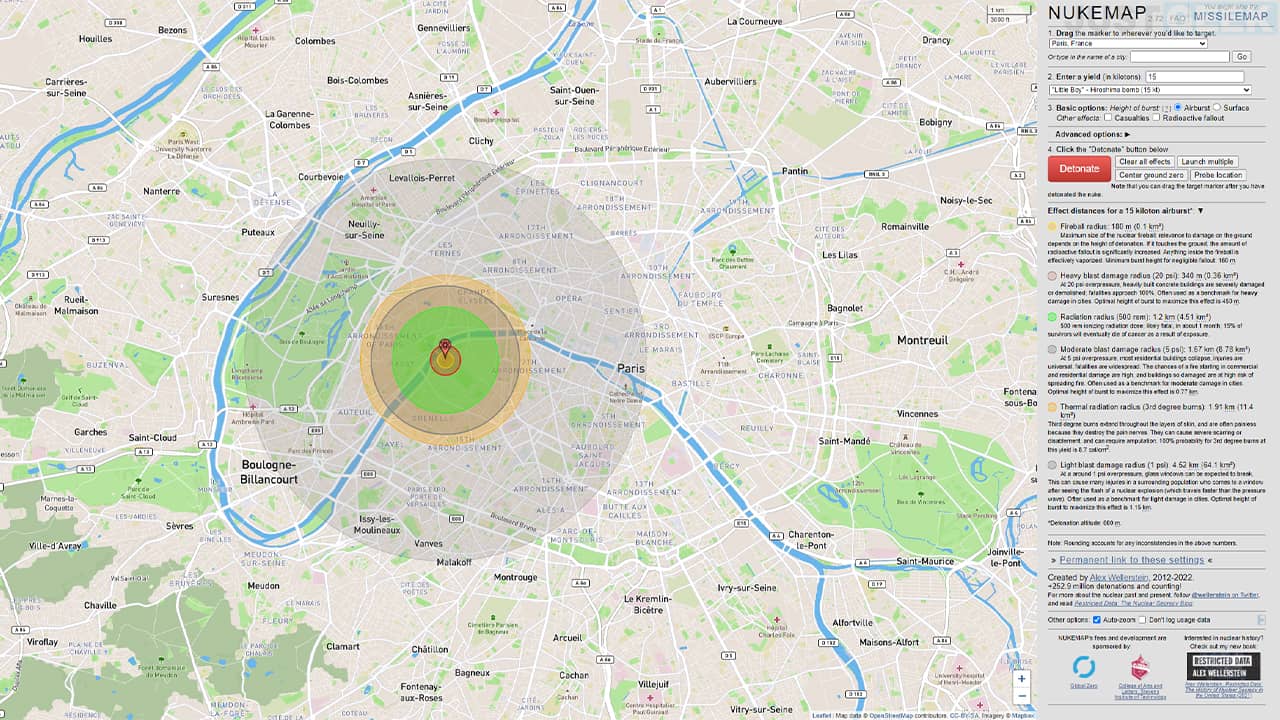 Calculate the fallout generated by the blast

You must remember that the risks of a nuclear bomb attack are very high. Immediate victims are those within a radius of 340 meters. Using the calculations on this site, it becomes possible to get an idea of ​​the percentage of possible deaths. Men are not the only victims of the aftermath of a bombardment. Buildings and various facilities suffer. Even concrete buildings succumb to an explosion. The platform then shows you the impact of the bomb on well erected buildings.

(Read more)  What is a nuclear power plant and how does it work?

In addition, all residential buildings within a radius of 1.60 km collapse without the slightest exception. As a result, the number of dead and injured numbered in the thousands. the blast damage nuclear weapon dropped extends over 4.52 km. With such a site, you yourself will have the opportunity to know all the possible damage on this stretch of 4 km.

Irradiation remains one of the most harmful effects of the nuclear bomb. It intervenes either at the time of the explosion, or in the longer term. So, using the settings on this site, calculate the radiation risk percentage of any type of bomb. Even if it’s not the Little Boy. You will find out the exact percentage of survivors likely to die thirty days after the explosion.

Finally, the site’s calculator draws up the fallout from a bomb based on the type of device in question. For example, some countries have extremely dangerous nuclear weapons. The site allows you to calculate the nuclear impact of one country on another if the two states ever go to war. Known nuclear devices in the world today are registered on the site. However, you can enter other coordinates to make your estimate.

What is the nuclear bomb?

Can we survive a nuclear attack?

What is the distance between Earth and the other planets of the solar system?