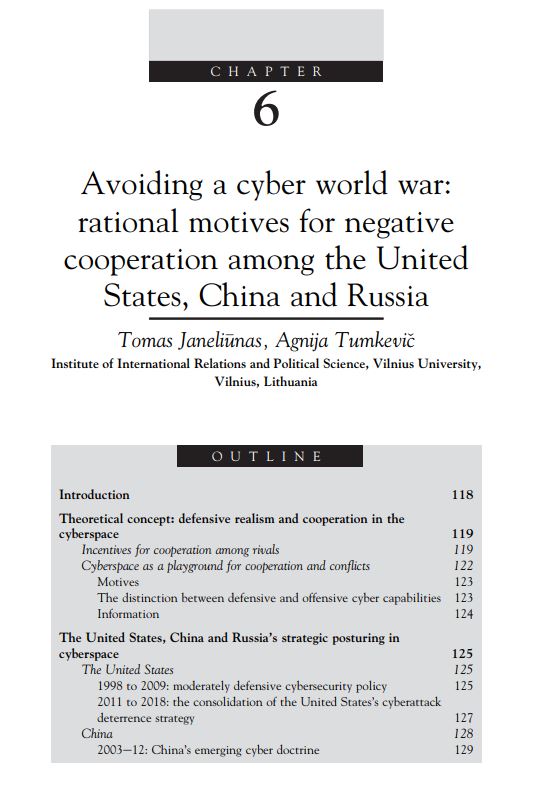 Cyberspace has become a military domain, and cyber instruments have been integrated into all aspects of modern warfare. However, anonymity is the distinguishing feature and one of the most important issue of cyberspace. In cyberspace, it is difficult to attribute actions to specific actors or distinguish hostile attacks from innocent mistakes. A lack of clarity regarding what constitutes a cyberattack under international law and the lack of credible retaliatory threats encourage foes and competitors to plan, initiate and conduct relatively cheap cyberattacks. The state-sponsored weaponization of cyberspace and the engagement of militaries in offensive cyberspace operations heighten the risk of a cyber arms race and cyber warfare.

The prospects for cyberspace conflict and cooperation among the major powers of the United States, China and Russia are changing. The threat of cyberspace conflicts increases the risk of a cybersecurity dilemma inadvertently prompting crisis escalation. The issue of escalation in cyberspace is critical given that the cyber domain lacks binding rules. The existing legal instruments for restraining cyberspace conflicts are modest. As history has revealed in the competitive post-WWII run-up to the nuclear arms race, this could prove a dangerous situation.

However, the same forms of cooperation practiced among potential enemies during the nuclear arms race era, including agreements on Theoretical concept: defensive realism

nuclear disarmaments, may be unfolding in the current cybersecurity domain. International relations theories, particularly defensive realism, explain how and why security needs can prompt cooperation between adversaries. Cooperation sought under these conditions, negative cooperation, is based on the need to minimize the risk of a direct conflict. Therefore, it is important to examine the United States, China and Russia’s cyberspace interactions. Are these states moving toward a global conflict, which could become a cyber world war? Or, are they restraining themselves and regulating the weaponization of cyberspace?

(Read more)  The concept of peace