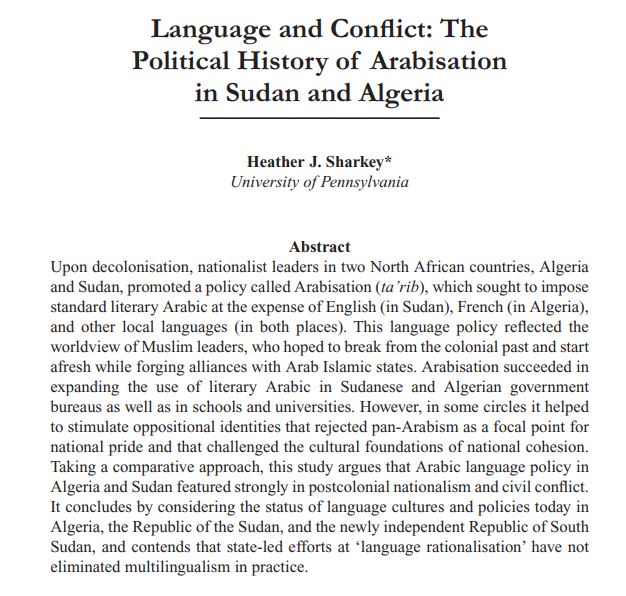 Upon decolonisation, nationalist leaders in two North African countries, Algeria and Sudan, promoted a policy called Arabisation (ta’rib), which sought to impose standard literary Arabic at the expense of English (in Sudan), French (in Algeria), and other local languages (in both places). This language policy reflected the worldview of Muslim leaders, who hoped to break from the colonial past and start afresh while forging alliances with Arab Islamic states. Arabisation succeeded in expanding the use of literary Arabic in Sudanese and Algerian government bureaus as well as in schools and universities. However, in some circles it helped to stimulate oppositional identities that rejected pan-Arabism as a focal point for national pride and that challenged the cultural foundations of national cohesion. Taking a comparative approach, this study argues that Arabic language policy in Algeria and Sudan featured strongly in postcolonial nationalism and civil conflict. It concludes by considering the status of language cultures and policies today in Algeria, the Republic of the Sudan, and the newly independent Republic of South Sudan, and contends that state-led efforts at ‘language rationalisation’ have not eliminated multilingualism in practice.