• Capacity evaluation model of coal power is established.
• Quantitative analysis is provided for each regional power grid of China.
• The coal power overcapacity of China exceeds 170 GW in 2019.
• The overcapacity situation may further deteriorate during the 14th FYP period.
• A reasonable scale of coal power is 950–1000 GW at 2025. 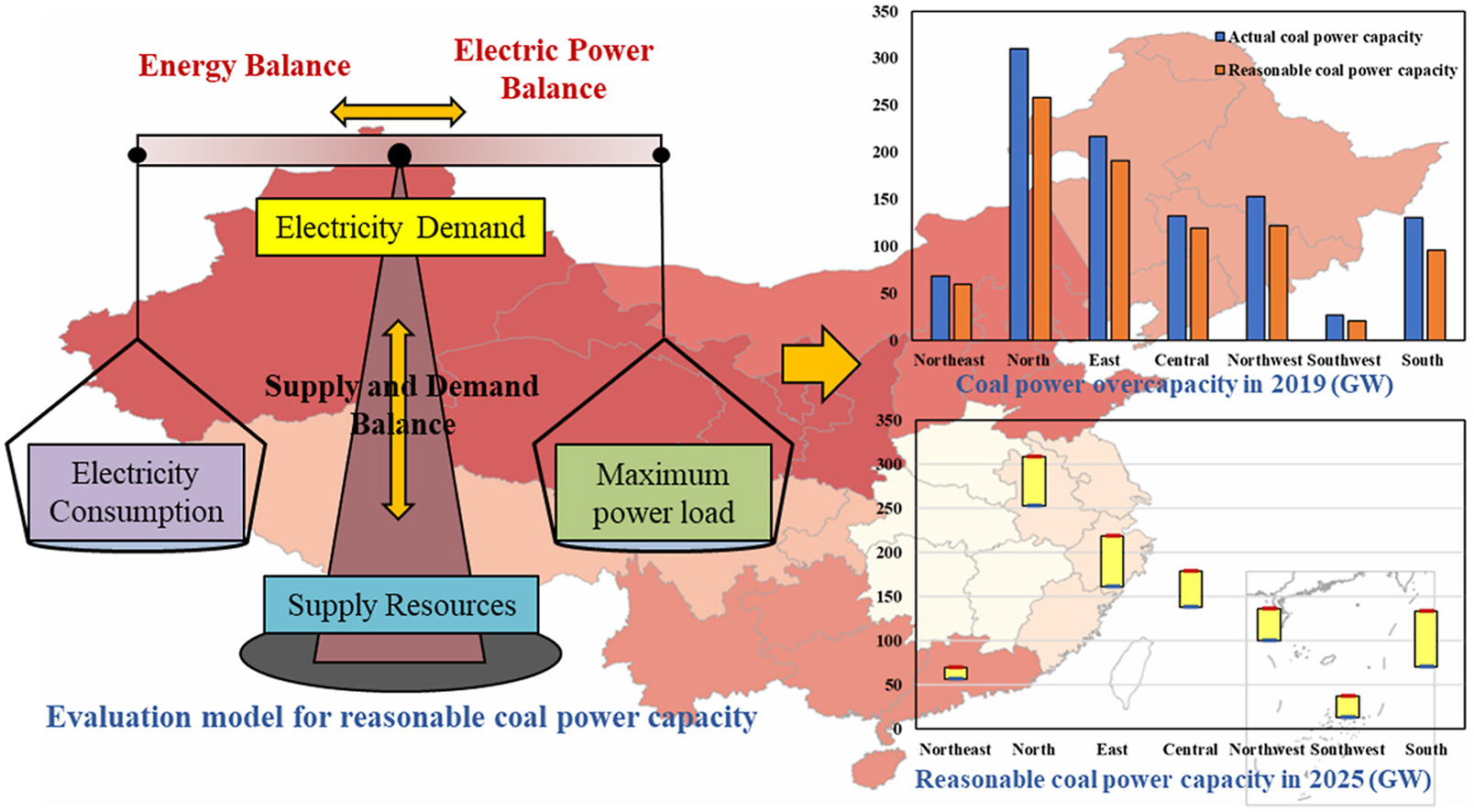 In this context, China’s coal power has become a popular research topic. Yuan et al. (Yuan and Zhang, 2019) analyzed the development path of coal power in China based on macro policies and resource and environmental constraints, and pointed out the necessity of controlling the coal power capacity. Xu et al. (2012) conducted scenario analysis based on electricity demand and carbon emission constraints, and concluded that the coal power capacity in China should be controlled within 1000 GW by 2020. Lin et al. (2019) analyzed the challenges faced by coal power development from the perspective of China’s power market reform, and proposed countermeasures. Meanwhile, various planning models for China’s power system have also been developed and applied. Hu et al. (2010) proposed an integrated resource systematic planning (IRSP) model to analyze the electricity saving potential of China’s power system from 2009 to 2020. Yuan et al. (2016) used the IRSP model to calculate the overcapacity of China’s coal power from 2015 to 2020. Zheng et al. (2014) expanded the model to include more elements like demand response and transmission network (IRSP-sgs). Wang et al., 2020a, Wang et al., 2020b) proposed the scientific coal production capacity (SCPC) model to evaluate the rationality of China’s coal power development from 2000 to 2016. However, the above models are all data-intensive, even requiring input of load profile and unit output characteristic data, which are usually unavailable (Yuan et al., 2016). Therefore, empirical values are often used to replace actual parameters that are difficult to obtain. Moreover, this type of model often takes the lowest cost as the planning goal, which underestimates the development of China’s power system restricted by political and environmental factors, so the accuracy of medium- and long-term planning is difficult to guarantee (Feng et al., 2018). Therefore, some researchers believe that using simplified indicators to directly assess the coal power overcapacity can ensure the reliability of the conclusion (Lin et al., 2018; Feng et al., 2018; Zhang et al., 2020).

The literature review shows that previous studies on China’s coal power overcapacity focused on the 13th FYP. However, the situation has changed significantly. Under the impact of the COVID-19 pandemic, China’s electricity consumption growth rate declined sharply in 2020 (CEC, 2020c). As the pandemic situation around the world worsens, the economies of most countries continue to weaken. Standing alone as a major trading country is difficult for China, and the electricity demand may also drop during the 14th FYP. Meanwhile, having undergone strict control since 2016, China’s coal power project construction has begun to show a trend of recovery. From 2020 January to May, the newly promoted coal power projects in China reached 48 GW, which is 2.8 times that in the entire year of 2019 (Jiang, 2020). Local governments have regained enthusiasm for coal power investment.

The central and local governments have started to draft the 14th FYP electricity development plan. The setting of coal power targets will have a significant impact on the future development trend of coal power. Therefore, scientifically quantifying the current coal power overcapacity and reasonably setting coal power development goals are urgent problems to be solved. On the basis of the new domestic and international situation, this study quantitatively calculates the current overcapacity of coal power in China through energy and electric power balance and evaluates the reasonable scale of coal power in 2025 for reference by policymakers. The research framework is shown in Fig. 1, and the rest of this paper is organized as follows. Section 2 presents the model, the key parameter settings, the scenario settings, and the data sources. Section 3 analyzes China’s coal power overcapacity in 2019 and the reasonable capacity in 2025. Section 4 is present the conclusions and policy recommendations. 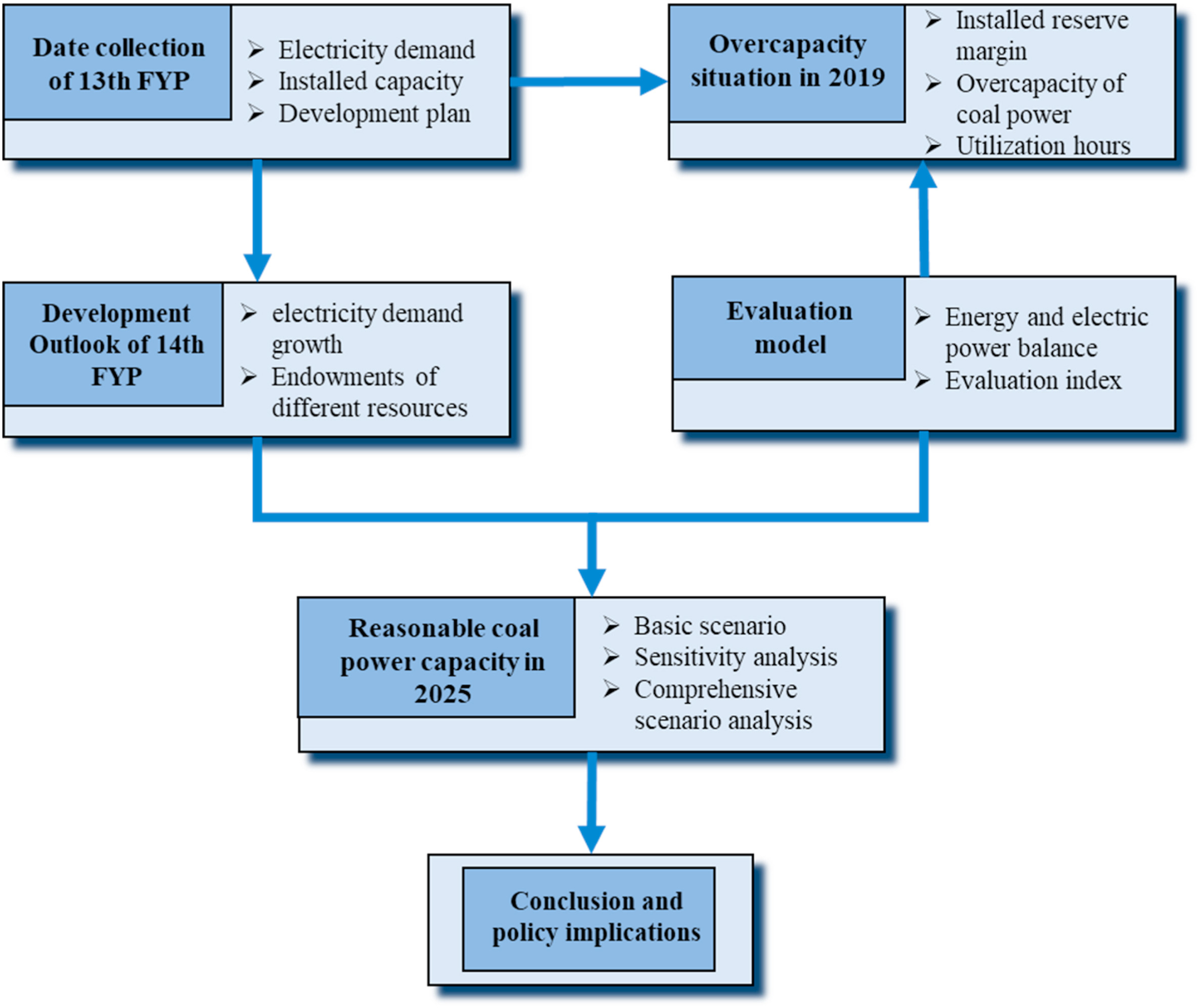 According to the research of Feng et al. (2018), an evaluation model for reasonable coal power capacity was established. The model is based on energy and electric power balance and selects the installed reserve margin, the reasonable scale of coal power, and the utilization hour of coal-fired units as evaluation indicators. 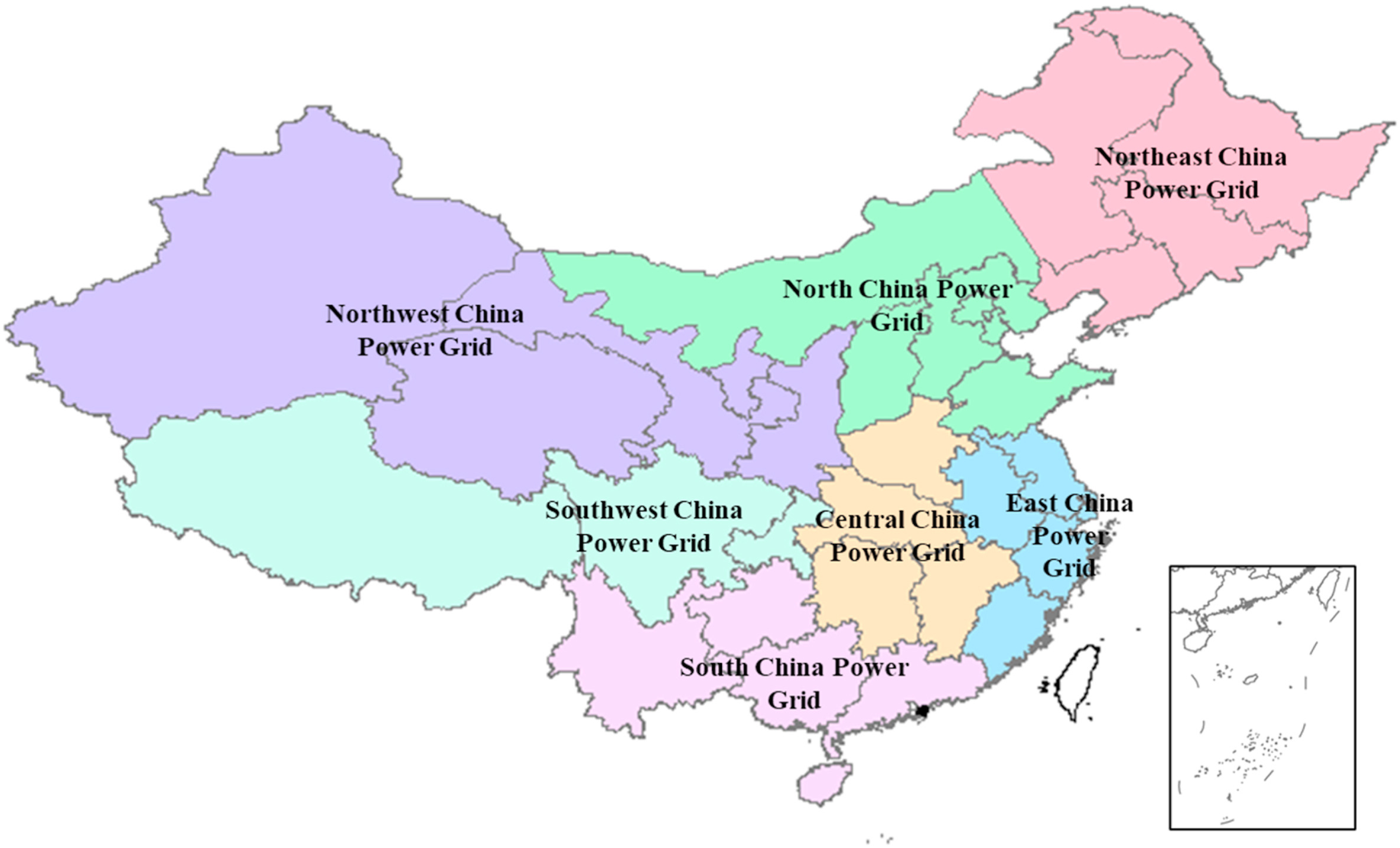 First, several key parameters in our model must be set, including the capacity factor of different power supplies and the reasonable installed reserve margins of each province and the regional power grid.

The power development of China is affected by many factors. In this paper, scenarios are determined by key influencing factors, including the growth rate of electricity demand, the development of renewable energy, and the capacity factor of hydropower and photovoltaics. The reasonable coal power capacity decreases in a high scenario and increases in a low scenario.

Table 4. The growth rate of electricity demand in 2020.

Xi,13: Electricity consumption growth rate of province i during the 13th FYP;

Xi,14: Electricity consumption growth rate of province i during the 14th FYP;

Yi,13: Maximum power load growth rate of province i during the 13th FYP;

Yi,14: Maximum power load growth rate of province i during the 14th FYP.

Finally, the electricity consumption and maximum power load growth rate of each regional power grid during the 14th FYP are obtained by adding the data of various provinces, as shown in Table 5.

The power installed capacity of each region in 2019 was obtained by China Power Knowledge (China Power Knowledge, 2020) (Table 6). According to the development potential and policy planning of each regional power source, the development trend during the 14th FYP period is estimated (Table 7). For hydropower, the abundance of hydropower resources and the construction progress of hydropower stations are comprehensively considered. For pumped-storage hydropower, the existing resource points, the approval, and the construction progress are used as references (Jiang, 2019). For nuclear power, the scale in 2025 is estimated through the existing and under construction nuclear power units (China National Nuclear Safety Administration, 2020). For wind power and photovoltaics, the resource endowments of each region and the development speed during the 13th FYP are considered (Li, 2020).

The renewable energy of China is rapidly developed, and great uncertainties affected by future policy changes. For example, according to the 13th FYP electricity development plan, the installed capacity target of optoelectronics in 2020 is 110 GW (NEA, 2016b). However, as of the end of 2019, the actual installed capacity of optoelectronics has reached 204.68 GW (CEC, 2020a). Therefore, we set different scenarios for the development speed of renewable energy. The basic scenario is shown in Table 7, and the low and high scenarios fluctuate at 15% (Table 8).

The photoelectric capacity factor represents the output level of a photovoltaic unit at the peak load, which depends on the solar resource endowment and peak load period of a specific area. Feng et al. (2018) and Lin et al. (2018) set this factor at 0.25–0.3, which is a typical value in North America. However, this value may lead to an overestimation of the output level of China’s optoelectronics, and affect the calculation results. Zhang et al. (Zhang, 2017) believe that the photoelectric capacity factor of China is 0.1. Some provincial energy administrations (Energy Administration of Shandong Province, 2019) also set this factor to 0.1 when formulating the plan for summer load peak. In addition, the State Grid Energy Research Institute (State Grid Energy Research Institute, 2017) points out that the daily load curve in most areas of China shows double peaks at noon and night, and photovoltaics cannot participate in electricity power balance at night peak load. Therefore, the value of the photoelectric capacity coefficient should be as conservative as possible. In this study, we set the value to 0.1 in the basic scenario, 0.2 in the high scenario, and 0.05 in the low scenario.

First, the coal power overcapacity in different regions of China in 2019 is analyzed. Then, the reasonable coal power capacity in 2025 under the basic scenario is calculated. Furthermore, sensitivity analysis is performed on key influencing factors, including the growth rate of electricity demand, the scale of renewable energy, and the capacity factor of photoelectric and hydropower. Finally, through a comprehensive scenario analysis, the upper and lower limits of the reasonable coal power capacity in 2025 are provided. 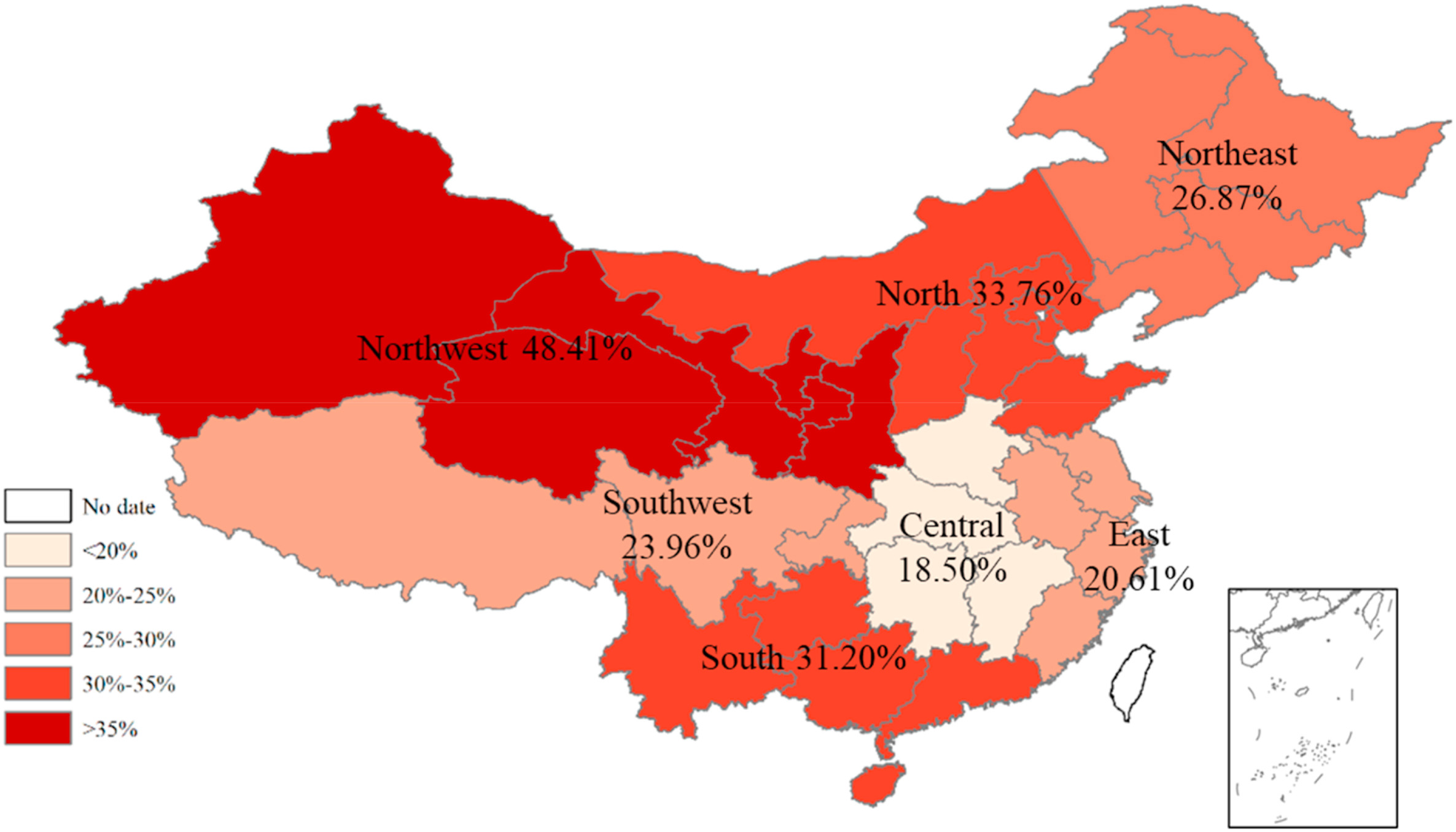 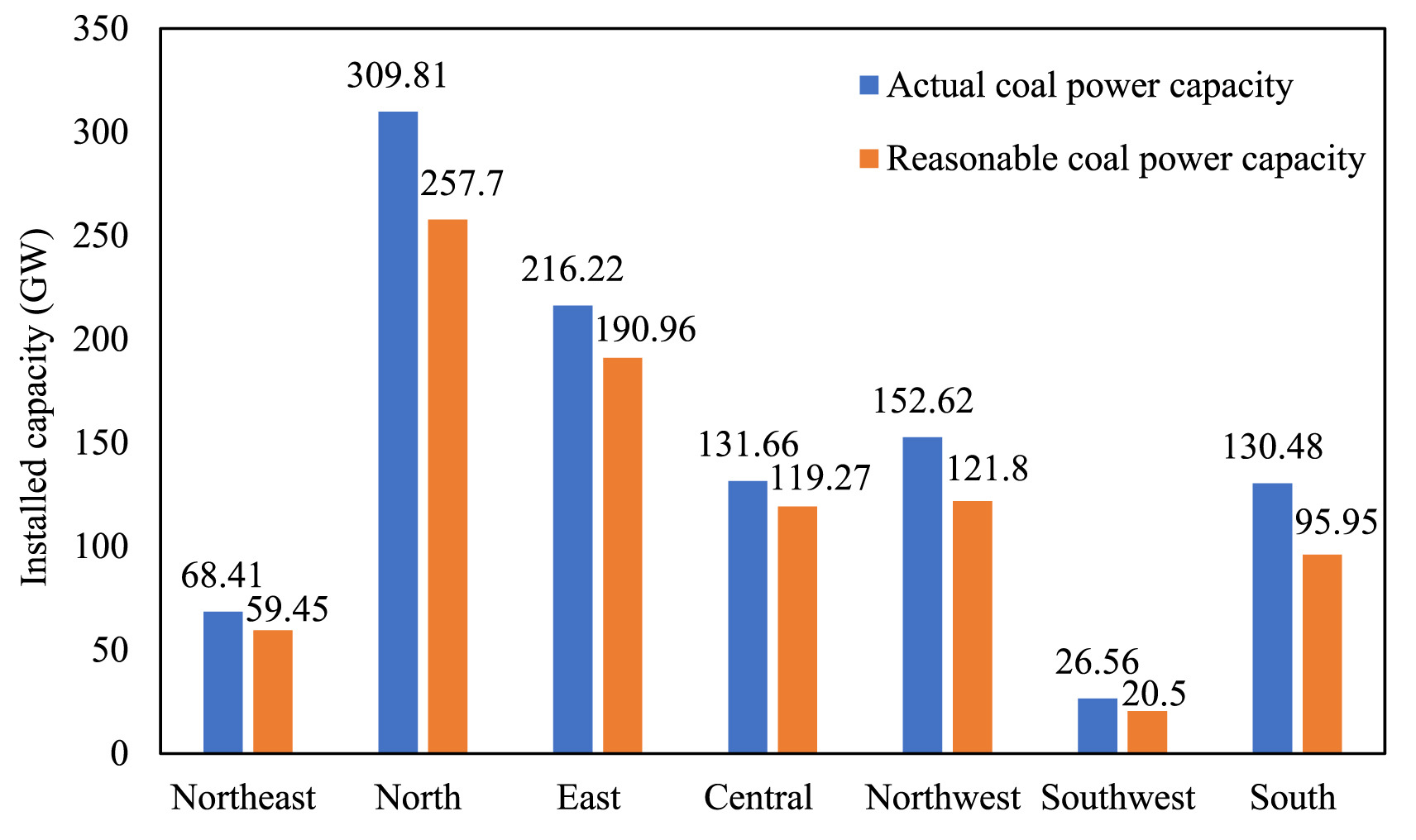 Fig. 4. Actual and reasonable coal power capacity in each regional power grid in 2019.