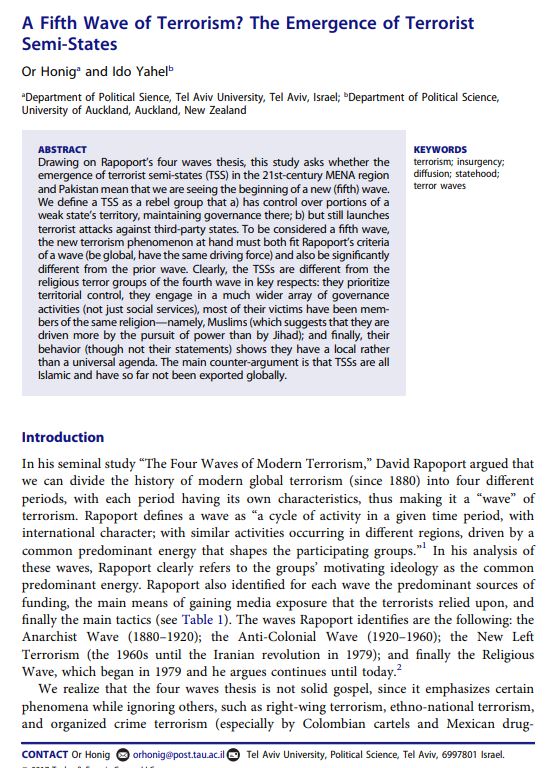 Drawing on Rapoport’s four waves thesis, this study asks whether the emergence of terrorist semi-states (TSS) in the 21st-century MENA region and Pakistan mean that we are seeing the beginning of a new (fifth) wave. We define a TSS as a rebel group that a) has control over portions of a weak state’s territory, maintaining governance there; b) but still launches terrorist attacks against third-party states. To be considered a fifth wave,
the new terrorism phenomenon at hand must both fit Rapoport’s criteria of a wave (be global, have the same driving force) and also be significantly different from the prior wave. Clearly, the TSSs are different from the religious terror groups of the fourth wave in key respects: they prioritize territorial control, they engage in a much wider array of governance activities (not just social services), most of their victims have been members of the same religion—namely, Muslims (which suggests that they are driven more by the pursuit of power than by Jihad); and finally, their behavior (though not their statements) shows they have a local rather than a universal agenda. The main counter-argument is that TSSs are all Islamic and have so far not been exported globally.

(Read more)  The new international community and the phenomenon of terrorism