On the outskirts of Riyadh, officials show visitors around one of the latest investments by the sovereign wealth fund at the forefront of Crown Prince Mohammed bin Salman’s plans to modernise the economy of the Gulf state: a defence electronics factory.

Saudi Arabia has one of the world’s biggest defence budgets. The kingdom spent $57bn on protecting the country last year, according to the Stockholm International Peace Research Institute. AEC is at the heart of its plan to increase local production to 50 per cent of its defence spending within a decade. In 2017, the year Sami was established, it accounted for just 3 per cent.

The project, in line with Prince Mohammed’s Vision 2030 plan to diversify the oil-dependent economy, is ambitious, but analysts said it would be a mistake to dismiss it.

“Just look at the amount the Saudis spend on weapons . . . that type of budget can get you an industry if you want it,” said Francis Tusa, a defence consultant and editor of Defence Analysis. “They will get a capability. Absolutely.”

The plan also reflects Saudi Arabia’s desire for self-reliance — Riyadh is at war in neighbouring Yemen, its oil facilities and other infrastructure are exposed to drone and missile attacks from Iran-backed rebels, and weapon sales from the US, its biggest supplier, often face opposition in Washington. Two motions are at present making the rounds in Congress to block a $650m sale of air-to-air missiles to Saudi Arabia.

“There is a strong need to boost military capabilities and self-sufficiency and strengthen defence ecosystems in our region, including Saudi Arabia’s, so I see big defence budgets being ramped up,” said Walid Abukhaled, Sami’s chief executive, in an interview with the Financial Times.

“One of the main reasons Sami has been established is sovereignty, you want that self-sufficiency. Another is the time it takes sometimes to repair and maintain a product, to wait for a spare part can take two years,” he said.

To accomplish that, Sami wants arms manufacturers to move production and maintenance to the kingdom. “All my partners know, the good old days . . . [the original equipment manufacturers (OEMs)] who come sign a contract and deliver it all from abroad are gone. That’s not going to happen any more,” Abukhaled said.

“That’s forcing the big players to say we need to think differently, we need to work with Sami, or other Saudi local partners, to win contracts. OEMs could build their own facility in the kingdom,” he said.

Sami is already looking to assemble Lockheed Martin’s Blackhawk helicopters in Saudi Arabia with local labour, and armoured vehicles in partnership with a United Arab Emirates company. Sami, whose divisions include aeronautics, defence systems and missiles, is in talks with other companies as well.

“Other companies and countries have taken 30 to 50 years to do it, so it’s impossible to do it all organically, so you have to look outside and look at acquisitions,” Abukhaled said. 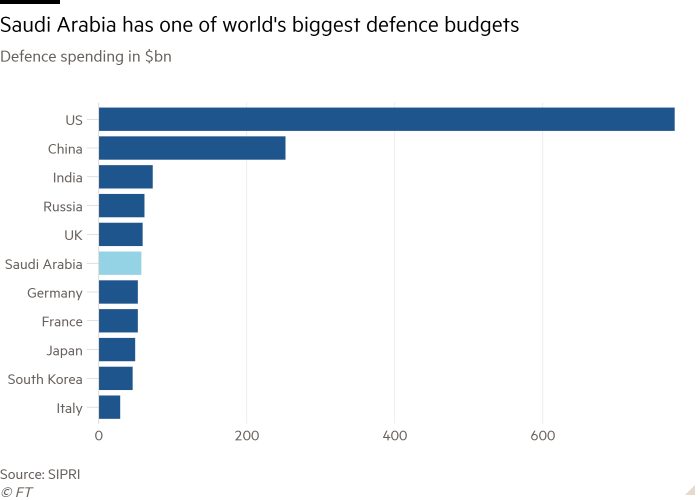 One of its priorities will be a drone defence system, he added. A 2019 drone and missile attack that Iran was accused of masterminding temporarily knocked out two Saudi oil facilities and took offline about 5 per cent of global oil production.

Still, Sami, which has begun to manufacture its first surveillance drone, is a latecomer to domestic military production in the region. Its neighbour, the UAE, already produces surveillance drones and armoured fighting vehicles that saw combat temporarily in the Yemen and Libya wars. Israel, whose military budget is less than half of Saudi Arabia’s, makes some of the world’s most advanced armaments. Iran, its main regional rival, has an increasingly sophisticated domestic arms industry.

Given the massive spending on arms, the Saudi market is too big for the foreign defence industry to pass up, said Charles Forrester, lead analyst for Middle East industry and budgets at Janes, the defence specialist. “For them Saudi Arabia is too big to ignore and there are some countries and companies out there that are realising they need to catch up because they have lost ground over the past few years,” he said.

For now, the facility in Riyadh has become a showcase for reforms sweeping the kingdom, which include the “Saudization” of a workforce traditionally reliant on foreigners, and the entry of women into the workplace.

The AEC foyer features some of its products — circuit boards for US-made F-15 jet fighters, military radios and, at the centre of the display, an upright laser-guided missile for which the company makes components.